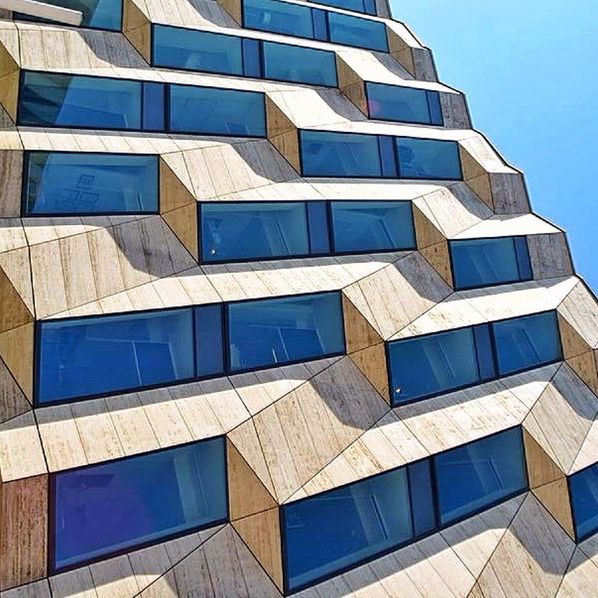 Today, photographs of architecture are ubiquitous in our social media feeds, popping up in every home and interior magazine and becoming an art form suitable for most people. But why has architectural photography taken such a prominent role in our perception of art, and how come it’s so widely adored and popular? I have contacted four photographers who share their architectural pictures on Instagram, to talk about what drives them in their work and why they think this type of photography is so amazing and worth taking an interest in.

Architectural photography can have many shapes and forms, from a picture of an entire building to a fraction of it, a detailed graphic pattern for example. Jesper Nielsen (@yfrasil) says that his passion for architectural photography started with an interest to highlight and draw attention to wonders created by man, even the smallest things. He means that the will to uncover hidden details and showcase the meticulous planning by people behind the building was his way of celebrating their work.

To capture a creation as big as a building on camera, is a very easy way to make that object accessible to anyone, even if they do not possess the building themselves or travel to its location. Looking at, or buying, architectural photographs make it possible to feel close to something grand and majestic. I think that the classification of architectural photography as a respected art form makes sense since it shares many characteristics with various art styles of the 20th century. The straight lines, the geometrical patterns, a wide range of colours and shapes, and the possibility to let your imagination run wild with thoughts about the object. Looking at an architectural photograph featuring a selected area of a building with such patterns– is there really any major difference to looking at a painting or sculpture by artists such as Fernand Léger, Juan Gris, Piet Mondrian, Barnett Newman or Michael Kidner?

Jesper Nielsen says that the important thing to him when photographing is the geometry and mathematics of the building. Creating symmetrical photos with interesting angles and unusual views seem to be common for all photographers that I interviewed. Their goal is making people aware of the beautiful shapes that are around them and making them #lookup, a hashtag on Instagram devoted to pictures of architecture taken in frog perspective, also known as worm’s-eye view. (See also #lookupclub and #minimal_lookup).

Isabel V.F (@worldfacades) means that a building that may be considered ugly still can have beautiful parts; you just have to find them. This hunt for details and angles that highlight the beauty is thrilling to her. She likes all architectural styles but is especially passionate about straight facades. Finding our own favourite architectural feature might be one of the reasons why this art form is so popular.

Anne Bonde Østerby (@anneoesterby) thinks that one of the reasons she values architectural motifs is because they look different depending on light, sunbeams or shadows so even a building she has seen a thousand times can still surprise her. They also offer the chance to perfect the pictures since the buildings stay where they are, unlike people who tend to move a lot. Caroline Rotterdam (@carolinerotterdam) agrees about the convenience with photographing a still target. If she has found a building she likes, she often goes back to take a picture of it during different weather conditions, when the light or sky gives the motif a new feel and reflections appear in new ways. Why architectural photography has become so popular as an art form she thinks has to do with the modern architecture of our time, that is “constantly getting more and more beautiful, even arty”. Caroline also thinks that the vast possibilities of editing architectural photography can give the photo spectacular effects that make them suitable as art.

But why have photographs of buildings entered our homes and minds to such a degree? And why is this art form so popular to engage in? Jesper Nielsen thinks that it stems from the fact that “it’s easy accessible art. It’s everywhere, in any shape, age, colour, and function – and with a Smartphone it’s rather easy to capture something that just caught your eye”. He also argues the importance of origin of a building and thinks that it says a lot about the location where it was created. Traditions and styles vary from country to country and evoke thoughts of places far away or close to home. Jesper says that he does not know why people would want to buy architectural photography, since he prefers to capture it himself. But unknowingly he might have given me an answer I think makes perfect sense to why people want to put this art form on their walls. Jesper says: “Architecture is rarely political, and therefore not dividing anyone. When you are travelling somewhere, architecture is probably always the first encounter you have with the new place. Airports, train stations, metros, hotels, museums… All the time you are navigating through this art form, and thus having an opinion about it.”

To many people architectural photography seems to be the perfect way to satisfy their desire to travel the world and illustrate their cosmopolitan personalities in a way that is pleasing to the eye and anybody can relate to, while not risking agitating or provoking anyone that steps into our home.

Check each picture for photographer.